Yesterday, aging in my world was having to straighten up carefully after bending over, because of the ever-so-slightly degenerating disc in my lower spine. Today it was lifting my eyelid (which has somehow become a bit ruched) so I could get my eyeliner where it belonged. Just the left one. This is the new normal? I asked my reflection in the mirror.

I don’t suppose anyone jumps up and down when these things start and says “Yes! Visible aging! Just what I always wanted!” On the other hand, what I am talking about is small change compared to problems some of my contemporaries are dealing with, and what I glimpse on the road ahead. When the boys were growing up, I knew people who said, “Oh, I couldn’t wait for the (whatever) stage to be over,” because they were really looking forward to engaging their kids at a higher level, or to when their kids became more independent. I have made a point of celebrating every one of their phases, even when I felt it was literally draining the life from me (middle school, my eternal nemesis!) Living and loving every stage my kids went through is a lesson I learned from being in kind of a rush to grow up. I was uncomfortable with myself as a teen (who isn’t?) and wanted to skip ahead to the independence and presumed confidence that came with adulthood. Looking at kids now, I feel I missed some opportunities trying to race through the awkwardness.

Every decade has brought its gifts. Confidence and comfort in my own (somewhat sagging) skin continues to build. I appreciate people and opportunities more, and value time like I never did in my youth. Living in gratitude does change everything. Well, except the aches and the reduced elasticity. It could always be worse. One of my favorite radio commercials (don’t remember the product, of course–memory lapses) announced, “Sometimes wisdom comes with age. Sometimes, age comes alone.” I hope the wisdom I am gaining offsets the memory lapses, etc. and that, as bits and pieces of my physical self start to corrode and crumble a bit, that some of the sharp edges on my personality also soften. I project it won’t be that many years before I fully reach the “shabby chic” stage. I just hope it won’t have completely gone out of fashion when I do.

What are the ups and downs of the age you are at?

Here is a very special Lucy’s Football. Amy usually writes very witty, irreverant, and verbally spazzy posts that make me laugh out loud. This post, still entertaining but written in a more serious vein, brings up the issue of the mastering of English by our high school students (or the lack therof.) Click on the link “Reblogged from Lucy’s Football” at the top to read the whole thing. I hope you enjoy it, and please check out some of her other posts!

“Education is not the filling of a pail, but the lighting of a fire.” –William Butler Yeats

As you are all undoubtedly aware, I love English. And words. And language. And grammar. And all things related to such. Not just English, either. I love other languages equally as much. Yesterday, Andreas taught me the word Jötunn, which means a Scandinavian troll. HOW AWESOME IS THAT. The most awesome, is how. (Per Andreas, it is “the origin of the word giant – jätte in Swedish.” You all only WISH you had a friend as awesome as Andreas who knows about not ONLY science but ALSO geekily kickass foreign words with umlauts! Oh, how mouth-watering, a well-placed umlaut! I SWOON FOR YOU, UMLAUTS!)

Words streaming through my brain, linking, twisting, and rejoining—urgently and repeatedly, drove me from my bed at 4:38 this morning. Intent upon capturing some and exorcising others, I slunk down the stairs to find my west facing living room aglow in moonlight. I stopped, as did the words in my head. As much as I admire sunrises and sunsets in all their varying colorful glamour, the moon exerts a pull on my heart as of tides. Her cool monochromatic sublimity loosens my grip on the fevered daytime strivings that have followed me into the night. Stop now. See. Breathe. 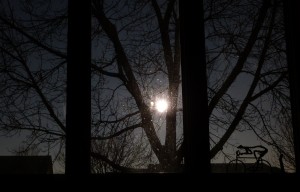 I spent my first year of college finding independence and re-inventing myself, forty miles from home in Brookings, SD. Baby steps. Brookings was a town of about 15,000 people, which grew by 7,000 when classes were in session at SDSU. I could have returned to my awesome tour guide job in De Smet, but that would have entailed moving back to my parent’s house, which was unthinkable. Two friends and I rented a small two-bedroom house near campus for the summer and got jobs. I got my first waitressing job at Howard’s Restaurant, an independent family-style place on 6th Street. The owner, Howard, was the main cook. Howard was a chubby man with a pointed face who taught me that orange juice is like gold and nothing is free. He had a young guy who worked the grill and a crew of waitresses, four or five of us, the others all with experience and drive. I felt out of my depth when I started there, but was sure I would catch on.

Howard’s had amazing hand-dipped shakes and malts; egg-nog and butterscotch were my favorite, but his specialty was  fried chicken, the preparation of which fell to the wait staff. While the others were jockeying for the good shifts out in front with tip-leaving customers, I, unaccountably intimidated by both the customers and the other waitresses, slumped into the back room and pried half-frozen chicken pieces apart so they could be batter dipped. I found out that my hands are painfully sensitive to cold and that I hate the wimpy side of my personality that trembled rather than demanding my share of shifts out front. No one was doing great, because even though the food was decent and reasonably priced, the traffic just wasn’t there. They made me choose a different name because mine, Lynnette, was too similar to one of the other waitresses, Annette, which was confusing. I refused to go with Lynn, so I took Val, from my last name, Vallery. Val became my alter-ego, and not the fiery kick-ass alter-ego I would have enjoyed, but the one who was trying to warm up her hands and wondering how she was going to pay for both groceries and rent.

Halfway through the summer I saw an ad seeking a manager for the Peanut Shack at the mall. Peanut Shack was a counter-front shop that sold fresh-roasted nuts, popcorn, and a variety of candy that we either freshly prepared or purchased. The manager’s job was to work shifts, hire and train staff, schedule other people to work shifts, track inventory, keep my mouth shut when the owners came in and grabbed a handful of cash out of the register to go shopping, and balance the cash drawer as well as possible under those circumstances. I rarely saw the owners except when they stopped by for money. I enjoyed the autonomy. The mall was small and in summer doldrums. Most of my customers were people who worked there. I stocked the Jelly Belly jellybean jars, I roasted cashews and other nuts, and made nut clusters with white, milk and dark chocolate. I dipped potato chips in chocolate and begged people to try them, because they were amazing. I made a homemade version of Almond Joys that taught me to love coconut. I could eat as much of the popcorn, nuts and handmade candy as I wanted, and got a discount on the candy purchased from headquarters. I loved the products, but quickly got sick of eating them as my main sustenance, and daydreamed of pot roasts and lasagna. When my parents gave me a beautiful Black Hills gold ring for my birthday, I was disappointed. My heartfelt desire was three big bags of groceries.  They had no idea. Of course, I also spent some of my hard earned wages on cheap 3.2 beer at the Lucky Lady,  the only bar that served 18-20 year olds in town, but I couldn’t have bought much of a pot roast with what I spent on happy hour brews.

I counted boxes of truffles and caramels and jellybeans, and cartons of raw nuts and chocolate for melting. I worked as much as I wanted, and more, when my meager staff didn’t show up for their assigned shifts. One day a woman came up to the counter and asked if I had any jobs. I looked at her in disbelief. Her hair was greasy and snarled. She stared at me blankly, breathing heavily through her mouth. Her blouse was misbuttoned, gaping open between her unrestrained breasts, and didn’t match her stained polyester pants. “Nope, no jobs here,” I told her, and she shoved a paper at me to sign for the unemployment office, attesting to the fact that she had indeed applied for a job at the establishment. The light went on–she had dressed, not for success, but for failure. Mission accomplished, signed and good-bye.

This was also the summer I rode everywhere on my big sister’s ten-speed bike, which she had given to me for my birthday a few years before. It was my sole mode of transportation until the accident. I was approaching an intersection where I had the right-of-way and the cross traffic had to stop. Seeing a car approaching the stop sign, I slowed slightly to make sure they were really stopping, then pedaled forward. The driver came to a complete halt, and then, when I was just past the center of her grill, she went, knocking me across the hood of her car onto the street and crushing my bike beneath her tires. “Don’t move! Don’t move!” she and a few passersby insisted, and a police officer showed up, but spent most of his time talking to the driver, who told me her husband owned the Taco John’s. Eventually the hot, gritty asphalt became too uncomfortable and I crawled to the curb, surveying my road rash and crippled bike glumly. The driver took me to Kmart a few days later and bought me a brand new Huffy ten-speed that cost probably a fourth of what my sister had paid for her bike, but I didn’t know any better. I named it Grace, and instead of becoming nervous about riding, I started edging toward a daredevil mentality, blazing through town in the dark of night, alone. That was where I found my kick-ass alter-ego.

At the end of the summer I went back to classes full-time, and declined an invitation to stay on with The Peanut Shack. Weeks later the owners went into bankruptcy and the store was closed for months before anyone else took it over. Howard’s Restaurant eventually folded and remained vacant a long time as well. Summer is tough going for business owners in a college town, and it isn’t a picnic for the people who work for them either. I never took another job in the food service industry, though I deeply respect the people who are great at it. For me, there were other worlds of work to explore.