Do you see the little splootch in the middle of this picture? 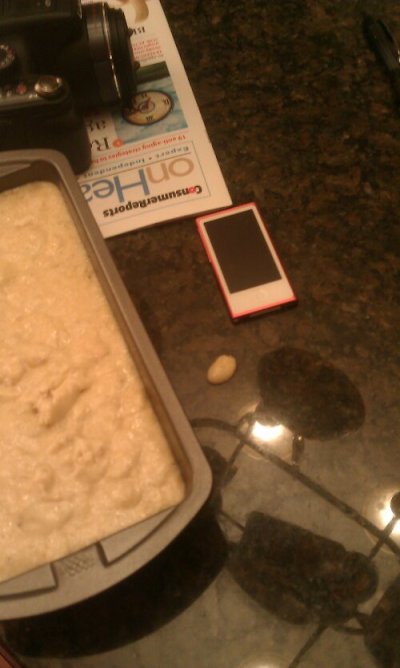 That splootch is the universe telling me to get my head out of my ass and stop leaving my valuable and much-appreciated electronics on the counter where I am making banana bread. The universe is thoughtful that way. I was done making the banana bread, except for sprinkling pecans on top, so I totally listened. I am like the universe’s hapless child, toddling around, getting into trouble, hearing the warnings and NEVER LEARNING.

Well, sometimes I learn. I have learned that not all the bad things that happen in life are really bad things at all. Some of the best things that have happened to me seemed bad at first. Getting laid off was pretty bad, until my time was urgently needed elsewhere. Along with hosting two lovely and important family gatherings in December, I was able to spend several days with my husband’s cousin Katie. Katie, you need to know, graduated from the University of Wisconsin-Madison with honors last May. She aced her Genetics final despite a throbbing headache that turned out to be a fist-sized tumor. She had surgery, chemo and radiation and was absolutely valiant through it all despite developing seizures, gradually losing her speech and balance, and having trouble swallowing. They finally found a drug that shrunk the spreading tumors, but it was too late. She turned twenty-three last month and died last week. We are celebrating her life this Saturday, a beautiful life filled with love, laughter, travel, music, books and a very strong sense of self. A beautiful life lived well, but much too short. I don’t speculate on the whys of this. I, and everyone who knew her, just miss her and grieve that we won’t be able to watch her life unfold. Losing Katie was a bad thing to happen. But losing my job and being able to spend precious hours with her was a gift for which I am grateful. So on behalf of the universe I would like to encourage you to love others, you don’t know how long you have them. Love yourself, for you are loved. Don’t despair; bad stuff happens but good things come along too. And keep watching and listening for what the universe has to tell you.
Peace.

Okay, we weren’t speaking of Poe, but after my last post and my rather self-conscious reference to “the feather light caress of mortality’s scythe,” I have been thinking about him. Like a lot of people, I hit a patch in my tween and teen years when I read a lot of Edgar Allen Poe and other authors who made the macabre an art form. I would probably have been at least a little bit goth, had there been such a thing in those days. I have never fully emerged from that patch; part of me loves the dark side, though I’d rather read it than watch it and prefer suspense to blood and gore. (Side Note: my friend Darlington tells me that in his culture–Rwanda, but in other areas in Africa as well–people love Hollywood movies but cannot comprehend our love of the horror genre. I suspect that if we faced real possibilities of genocide, murderous insurgency, and death by famine and epidemic we would enjoy horror flicks less also.)

So in reflecting how Grandma Marian’s death affected me, I was struck by how my response to death has changed as I’ve aged. Experiencing the loss of my own grandparents as a child, death seemed harsh but unimaginably distant. When one of my schoolmates died of a hidden heart defect we all grieved, but it still seemed the greatest of improbabilities, a one-in-a-million long shot, a lightning strike. Later, I lost a friend to breast cancer and then more and more people, not that much older than me, seemed to be coming out of the woodwork with life-threatening diagnoses and fatal tragedies. I lost my father to a car accident, one friend to an aneurysm and another to a drunk driver, my best friend’s mom and my husband’s mom died of cancer, and my sister and my mom both got cancer. My sister and mother survived, but death, always a possibility on an intellectual level, was becoming undeniable even to my gut. When my husband’s grandmother died, even though she’d lived an abundant life into her nineties, death felt a whisker’s breadth closer. I heard the swoosh of a blade through the air and felt the barest touch of metal to my skin. The scythe, I thought at the time. Now I realize that Poe had it right; it is a pendulum, and it is nearing. My husband’s grandfather confided to him before he passed on some years ago, that he was ready to die. He’d had a good life, he said, and all his friends were already gone. With this most recent funeral, it struck home that perhaps every loss as you age cuts deeper.

Some cope with this reality by chasing sex, things, or inebriation; or by creating a legacy through child-bearing, corporate empire-building, or writing a book. Then there is God. Some would charge that religious faith is just the covers a child hides under, hoping they will shield him from the horrors in the dark. I believe it is more than that. My faith, imperfect as it is, doesn’t protect me from death or loss, or even worry and fear. It does shore me up when I start to crumple, and it does help me reach out past my own self interest in a loving way to others, especially those others I find hard to love. It gives me an assurance of a bigger plan that I don’t need to understand to play a part in. And all it asks is that I keep trying, even as that figurative pendulum swings ever closer. I can do that. Maybe I can build a legacy of sort, as well.

The life of Edgar Allen Poe had its share of horror, but his legacy of literature has excited the imagination for nearly two centuries. The movie The Raven, starring John Cusack (one of my favorite actors,) is released Friday (April 27th) and I am looking forward to it. Poe, played by Cusack, teams up with a detective to catch a serial killer, who stages his kills based upon Poe’s stories. I don’t expect the same level of entertainment from the movie that I derived from Poe’s stories and poems, but I hope it is well done. That is the least we can ask from a film that dares to invoke a master of the macabre.

What movies and books give you shivers and thrills? A few of my top listed books: Something Wicked This Way Comes by Ray Bradbury and It by Stephen King. Movies: “What Lies Beneath” and “Coraline.”

Heat radiating off the car’s bumper warmed my calf as the PT Cruiser pulled to a stop, two inches from my body. I stepped up onto the curb with my heart in my throat, but curiously calm otherwise. Seconds ago as I had entered the crosswalk zone between the store and the parking lot in front of Office Max, I had noted the red Cruiser about thirty yards away approaching the stop sign between us. Plenty of time, I reckoned. I was halfway through the crosswalk when I registered the sound of acceleration, instead of braking, to my right. With the reflexes of a sloth, I continued ambling across the road, with the uncomfortable inkling that something bad might be about to happen. Then, the whispering hiss as the cruiser slowed and stopped, just in time. If the driver hadn’t braked when he had, I would have been in the dead center of his grill when he hit me. I glanced at his face. He was an elderly man, with unkempt gray curls, his skin in folds around his mouth, and eyes that asked some kind of irritated question: “What the hell are you doing there?” Or, “Where the hell was the brake a minute ago?” Or “Who the hell am I and where am I going?” I was rattled, but for some reason felt a comment was necessary. Pointing from the safety of the curb, I gently but firmly stated, “Sir, there is a stop sign right there.” Like that was the problem.  I am sure he did see the sign. No, it was the old, “hit the gas instead of the brake,” situation.

We should eat right, exercise, and otherwise take care of our bodies, but obsessing over our physical health is no guarantee of either long or healthy lives. You never know when that Cruiser with your name on it is headed your way.