This is the second installment of the Warriors on Wheels series which is intended to celebrate unique individuals who transcend their diagnosis, and promote Tour de Cure, the event they participate in to help defeat diabetes. Ride. Party. Stop Diabetes.

Cynthia Zuber recently observed the twenty-fifth anniversary of her Type 1 diabetes diagnosis. Diabetes wasn’t the end of her life, but it wasn’t the end of her health difficulties, either. She was later diagnosed with other conditions, such as Hashimoto’s Thyroiditis, and multiple food allergies. As Cynthia says, “Diabetes + food allergies = very challenging,” and as a result, she takes her health very seriously.

Five and a half years ago she began seeing a classical homeopath whose interventions have helped her naturally regulate her blood sugar levels, reducing, though not eliminating, her need for insulin. “I have found that holistic therapies have helped me feel my best, and let me live life well even with chronic health conditions,” she says. Homeopathy, Shiatsu massage, an organic whole foods diet, a daily walk and yoga 2-3 times a week are a handful of the things Cynthia does to stay in balance physically and emotionally. “Exercise is an everyday must,” she emphasizes, “as well as proper sleep, a good diet and controlling stress.”

Cynthia is a St. Kate’s graduate with a BS in speech communication and minors in psychology and theology. She is currently taking classes part-time that put her on track to become a holistic health practitioner specializing in healing touch and homeopathy. “I want to share the holistic therapies I have found to help others live a healthy and happy life. Health challenges do not have to limit you. Holistic treatments integrated with traditional medicine can greatly reduce symptoms, allowing people to live a much better life and accomplish their goals.”

One goal that Cynthia has for 2012 is a return to the Twin Cities Tour de Cure. She first rode the Tour in 2011, signing up two weeks before the event, and riding 27 miles on a mountain bike. She had mixed results from the experience, finding her lack of experience with cycling to be a challenge for controlling her blood sugars that day, but she was more than impressed with the overall event.  “Being a Red Rider [a Tour participant who wears the iconic red jersey that indicates they ride with diabetes] and being part of the community of the American Diabetes Association, I have never met kinder people with more passion for a cause. They call themselves family, and they really are. The whole experience is one of being supported, encouraged, and cared for.” This year Zuber plans to ride the 27 mile route again, only this time with more training under her belt, and a lighter bike.

Another goal Cynthia has acted on to help share her passion is her blog, Diabetes Light: My holistic journey to health, which she began in December and on which she offers information about holistic health practices, perspectives on living with chronic health conditions and even recipes. To learn more, check out her blog at http://diabeteslight.com. If you like what you see, click the “Like” button, and/or find the Diabetes Light community on Facebook and join in! For more information about the Tour de Cure and options to join in, volunteer or donate, check out their website: http://www.diabetes.org/twincitiestourdecure.

Last June I blogged about Twin Cities Tour de Cure, a cycling fundraiser for the American Diabetes Association that I participated in for the first time in 2011. I was blown away by the route, the organization and the amazing people I met. Also by the party at the end of the ride, which was the best ever finish line I’ve crossed (great food, live music, a beer garden and NO speeches!) Janeece, one of my new best friends at the TC Tour de Cure headquarters, asked if I would write a few words about some of the people involved in this year’s ride and see if we can’t get a few more of you as excited as we are about the upcoming event (Saturday, June 2, 2012! Save the date!)

A lot of people I have talked to who have gotten either the Type 1 or 2 diagnosis have talked about the changes they have had to make as a result of their diabetes. Some of the changes are to improve health, like healthy eating and weight management, and other changes, like blood sugar maintenance, are to prevent health problems. When I spoke with Officer Kevin Wells at the 5th Precinct in Minneapolis, I was struck by the fact that when he was diagnosed in 1993, he was already a long-time nutrition and fitness enthusiast. His approach to diabetes seems to be to not let it change the way he likes to live. 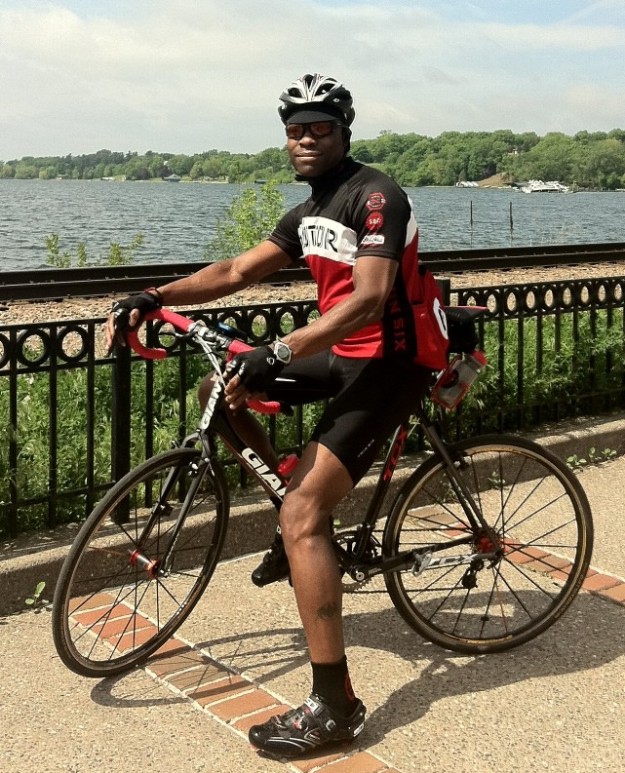 Kevin’s passion for cycling began in 2005, when he took an indoor spin class to add something new to his workout regime. “Everyone there talked about riding outside,” he says, so he tried it. “I fell in love. That was the first year I did the Tour de Cure.” He commutes to work on bike whenever he can and pushes himself with distance and/or intensity on training rides outside as often as possible, or inside on a trainer when the weather is bad. In addition to the fun and challenging workout he found in cycling, Kevin discovered another obsession: the gear. He now owns several bikes and a plethora of garb, cycling computers, GPS systems, and other things that take his ride to the next level.

I asked Kevin if his intensity with cycling complicates his blood sugar management. “Long steady rides will continuously burn carbs,” he explains, “so you just have to be sure not to let your blood sugar fall too low. The way I ride pushes my anaerobic threshold, which is where the blood sugar actually spikes. When I don’t feel good on a ride I have to test [my blood sugar] because I can’t always tell if I feel off because I am low or high. I don’t let it stop me, though.”

Kevin enjoys other cycling events, such as the Tour de Tonka, and local duathlons, but Tour de Cure has a special place in his heart. “The Tour is a great, fun event. I’ve met a lot of nice people, and the food’s good. Last year, I rode the 62 mile route, and commuted to the event and back home on my bike, so I got in 100 miles. I calculated that I burned 6,800 calories that ride. I felt great.”

The folks at TC Tour de Cure would like to thank Kevin Wells for supporting the Tour with his participation and story. Please join Kevin, myself and the other riders at the event either by riding or joining the ranks of volunteers, or consider donating to support the ADA drive for research, education and advocacy for people with diabetes. You can get started by clicking on this link:  TC Tour de Cure.

The first forty miles were pure fun, and that was a relief, because I had done a pitiful amount of training on my bicycle. The day of the American Diabetes Association Tour de Cure (bicycling fundraiser) was inarguably the finest weather day thus far in 2011. I had raised over $500 (thank you family and friends!) and committed myself to the 62 mile route (a metric century—100km.) The route was beautiful, the volunteers were supportive and the paths were not too crowded to keep a happy pace. I was riding alone in the midst of 1500 other riders, but I’m not shy so I struck up conversations here and there. Over those first forty miles I had several enjoyable encounters on some of the most beautiful trails I’ve ever ridden, through communities including St. Paul, St. Louis Park, and Minneapolis.

It was around mile number forty-two when I suddenly realized that what I was doing felt more like work than fun. The terrain hadn’t really changed—it was mostly flat with occasional hills into and out of river valleys. I was just getting fatigued. By mile forty-three my neck decided it was tired of holding up my head and started complaining. Loudly. Shortly after that I met Colleen, a woman not very much older than I am, who was wearing the distinctive red jersey that signified she was a diabetic. She had the slim strong build that many avid cyclists have and told me that her diabetes was diagnosed forty years ago. Forty years of finger pricks for blood tests and insulin injections. She had obviously taken good care of herself. The next rest stop on the ride, I eschewed the bananas and granola bars for a chance to lay down on the grass and stretch.

Later in the ride I met Amy, whose cousin Kristi died in her mid-thirties from diabetes. Amy told me that in her adolescence Kristi had made some rebellious choices about how to take care of herself, believing she wasn’t likely to survive past her twenties. Other stories I had heard about young people dying from diabetes illustrated that even when they made the best decisions they could, the insidious disorder could still steal a life away.

Miles forty-seven to fifty-seven were okay. I had a thrill zipping down Kellogg through green lights at thirty miles per hour, but otherwise I was just looking forward to the finish line. At the finish line there would be free chair massages, food, music and possibly some familiar faces. A party to celebrate the distance traveled and the accomplished goal of raising awareness and money for the cause. In the meantime, miles fifty-seven plus were starting to be a painful grind. My experience is that once you’ve been in the saddle long enough, the seat pain sort of numbs back to discomfort, which only surges back to pain if you take a break and then get back on (did someone sharpen my saddle?) or have something really unnecessary happen, like your foot slipping off the pedal after a stop and your whole weight crushing one place or another. I find that the neck thing doesn’t numb back. It’s cumulative. Additionally, in endurance rides, you can try to stay hydrated and take in enough calories but it’s tricky even if you don’t have diabetes to keep things level, and when things get out of whack you can start to feel sick. Finally, there’s a mental obstacle, in that the last couple of miles have that nightmarish stretching out quality that makes them seem so much longer. One could get crabby. But the blessed finish line appeared and the music played and the food was good and the massage was better. Mission accomplished, I was tired but back to feeling great. I could pack up my bike and go.

But those Red Riders? They are still on their journey. Day after day they must continue to grind through test strips and insulin injections and carefully consider their diet, exercise, stress levels, and hormone changes because that is life or death to them. In other words, they never get off their bikes. Diabetes is a horrible condition that affects about one in twelve people in the United States, but there is promising research happening. Be part of the cure: raise money, donate, or volunteer at a fundraising event. You know someone affected by this disorder; you can help them close in on diabetes’ finish line. 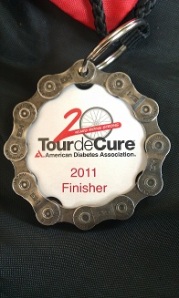