Discover magazine, how do I love thee? I love thee a lot. Even when I don’t understand thee, I love thee. I recently received the July/August issue of Discover, which appears to be very biology-centric. This makes me happy because biology is like the hot boyfriend with a little bit of an accent and colloquialisms that make communication somewhat difficult, as compared to the gorgeous boyfriend of physics who speaks a completely different language but I don’t even care, I could just lustfully listen to him spout incomprehensibility all day. Science turns me on, yo. I have been a subscriber for years and even though I haven’t lately been able to read every issue cover-to-cover, I do try. I have gotten ideas for stories and plot twists as well as general information and entertainment from the magazine and it makes me feel better than reading People magazine does. Kind of like when I choose to eat an apple over a doughnut. As Bill Nye says, “Science rules!”

So far two articles in this issue have gotten me excited. The first, “Superhuman Vision” is about a mutant cone some women (maybe a lot of women) are carrying around, a fourth cone that allows them to see an exponential number of color variations not visible to other humans. It is kind of like the Bizarro World version of the green/red color blindness that diminishes color perception in some men. How cool is that?! Mutant powers! X-(wo)men! The thing is that many of these women probably aren’t aware that they are seeing anything the rest of us aren’t because the nature of perception is so individual. Imagine trying to describe red to someone who can’t see red or provoke someone who doesn’t taste chocolate or tobacco in their red wine to do so. Difficult. I want them to make the test they describe in the article available on the internet. Maybe I have super vision! Actually I suspect that the only thing special about my vision is the degree to which I am frazzled by floaters, which isn’t very special at all.

The other article was “Earth’s Last Unexplored Wilderness Is…Your Living Room.” I love articles which immediately make me change my behavior. I wasn’t even halfway through the piece when I jumped up and opened all the windows on the main level of my house. For fifteen minutes–until the heat and humidity (already? at 8:30 a.m.?) forced me to close them again. Now, science reveals some uncomfortable truths, that maybe not all of you want to know. Far be it for me to expose you to graphic information that could gross you out for life, so two things: you might want to disinfect your showerheads, and wash your pillowcases with bleach in the hottest water you can. As I am. That is all.

It isn’t like Discover has never led me astray. I preached the anti-high fructose corn syrup gospel for over a year based on a quoted scientist who described it as a “metabolic disaster.” Further study showed no such thing, of course. Sugar is sugar, and we are getting way too much in all of its forms. But that is part of what I like about science. People make hypotheses and test them and share the results and other people say, “Hey, that is interesting! Are you sure?” and re-test the results, using what comes to leap to more evolved hypotheses, and we are all better for it. We grow from knowledge and experience. Ideally, science is all about open-mindedness, and using evidence to guide us toward knowledge. Some also use the lack of evidence to deny the existence of things for which we cannot test, like God for instance. In earlier generations, the existence of germs and sub-atomic particles and dark matter was considered ludicrous. I wonder what fascinating things we will know for certain in the future that are unimaginable to us today? I can’t wait to read about them in Discover. 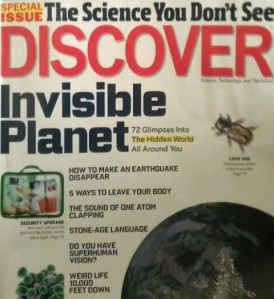 2 thoughts on “A Love Letter to Discover”

What are you thinking? Cancel reply