When you tell people you are going to San Francisco for the first time, whether they have been there themselves or not,  they give you a wistful look. “Oh! You are going to have such a good time!” they say. A northern Great Plains girl, my associations with San Francisco were the 70’s TV shows “The Streets of San Francisco” and “McMillan and Wife.” Also Rice-a-Roni. Of course the Golden Gate Bridge and cable cars. I imagined Fisherman’s Wharf to be a place where boats pulled up with their fresh catch and sold it to wandering passersby who had flowers and baguettes (or more probably, sourdough loaves) tucked into their market bags. As a person well into my adult years, I am savvy enough to know how naive my childhood impressions were. Also, since childhood, other cultural impressions of the area have surfaced, such as the gay rights movement and the movie Rise of the Planet of the Apes.

My first impression of the San Francisco area was the thrill of driving the winding hilly roads around Muir woods, and the disappointment of not stopping there because the parking lots overflowed to roadside parking that extended a mile beyond the entrance. My husband navigated and I drove across the Golden Gate Bridge to our hotel, Marriott on Fisherman’s Wharf, along which route I discovered that San Franciscans communicate by car horn. I don’t think any honks were directed at us, but from watching other drivers I could see that hesitation or confusion is not well tolerated there. Learn fast, or get out of the way. Cyclists, who aren’t well tolerated in other areas I have driven (ahem, looking at you–rural outskirts of exurban Minneapolis/St. Paul)  have apparently earned the right to cohabit the streets there, but then, if you are fit enough to climb the hills of the city and experienced enough to descend them without killing someone, you have been there awhile. We were happy to pull into valet parking. Almost immediately we headed toward Fisherman’s Wharf, two blocks away, to see what was up. The noise and the crowds were building around us as we approached the waterfront, when Mr. W’s cell  phone rang. It was his uncle, calling to tell him his (maternal) Grandma Marian had died unexpectedly, and asking him to pass the news onto his brother and father. This was a seismic shift; foundations were rocked. Physical fatigue and emotional aftershocks colored the rest of our stay. One second before we had merely been tourists, now we were Outsiders, viewing the colorful city through the bittersweet  lens of fond remembrances dislocated 1400 miles, and a feather light caress of mortality’s scythe.

The rest of this post could be quite maudlin if I dragged a lot of words into it and I hate that, so here is my San Francisco in a nutshell:

So it took a day or two, but in the end I too loved San Francisco, just not for the reasons I thought I would, and with a special poignancy from the sadness we carried with us. 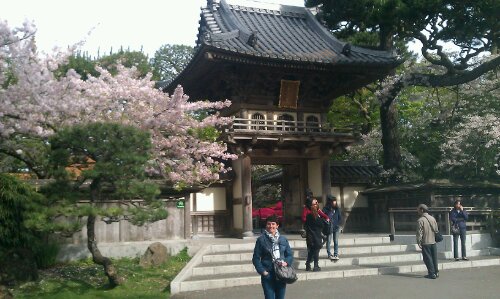 What are you thinking? Cancel reply