And before anyone gets excited, I am not making light of ADD or ADHD. I was diagnosed and treated for ADD for years when I was a kid. Evidently, in first grade, I did a lot of getting up in class and wandering around and often had no idea what was going on. More so than the rest of the kids. Back then, (so, so long ago,) the diagnostic criteria for ADD was this: give the kid Ritalin and see if it helps. If it does, the kid has ADD. So I started taking Ritalin in second grade. The funny thing was that our school had a very aggressive anti-drug campaign and I remember being scared to DEATH that I was going to become a child drug addict because Ritalin is an amphetamine, also known as SPEED. I was afraid that someday, when they took the drugs away, I would start robbing gas stations or hold the pharmacist at gunpoint to feed my addiction. My mom assured me that wouldn’t happen and bought me a little pill-carrier in the form of a jeweled golden treasure chest pendant, in which I stored one and a half tabs to be taken (rather self-consciously) at lunch. I guess it helped, because I stopped wandering around, but I remember still sitting in the classroom wondering why everyone else seemed to know what we were supposed to be doing but I didn’t. In fifth grade we discovered I was so near-sighted I could barely read the E on the eyechart, and eyeglasses helped a lot. (Oh, so that’s the blackboard you people keep talking about.) Back then, once you hit puberty, you were pronounced cured and they took the drugs away. There were no withdrawal-fueled rampages; I barely noticed. Nowadays I have caffeine and a great big kit of marginal coping skills that help get me through the day. But sometimes I still get so DISTRACTED by THINGS. Which is why you are reading this instead of the next Working Girl post, which is in development.

My Capresso hot water kettle, which I love because it looks and works so great, and which I hate because the lid broke off  ten days after the warranty expired, tells me there are eight liquid ounces in a cup. The measuring cups (silicone and pyrex) in my cupboard confirm that this is true. When I make tea I boil two cups, or sixteen ounces, of water in my kettle and this fills my favorite Pier One mug abundantly. When I make coffee in my new (Merry Christmas to me) Calphalon coffeepot, using their numbered lines, I have discovered that I have to pour in three and half cups of water to make three cups of coffee, which when poured into my favorite Pier One mug, leaves plenty of room for milk and Truvia and can still be stirred and walked with safely. As pictured. I already have to do tea to coffee conversions in my head to optimize my caffeine dosage, and now there are portion issues as well. If there are shiny or busy things happening around me this can all be difficult which I find unnecessary and irksome.  Also, you tell me, but I think maybe three cups of coffee at one go might be a little too much for me?

It got cold in Minnesota, which we all knew was going to happen, but never thought it would take this long. I woke up to find it was -10°, with a wind chill of -27°. As such, many of us now have ice indoors. As pictured. To clarify, dirty window on top, condensation, ridge of ice on the INSIDE of the window, and at bottom the wooden sill preparing to harbor mildew when said ice melts. On the upside, the temp has risen to -3°, and I usually take the interior frost to mean that the humidity levels inside are okay. Just thought I’d share that for those of you who don’t get to enjoy the full splendor of winter. If we ever get snow, maybe I’ll share that too, but since nearly every place in the nation EXCEPT us has gotten whacked with a snowstorm this year, maybe not. 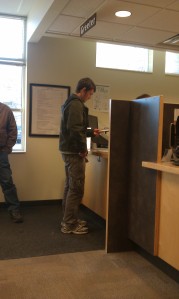 Older son got his driver’s license yesterday. I waver between punctuating that with an exclamation point and a teardrop. Yes, very good that he is achieving milestones (landmines? I wonder why that word wants to slip in there?) Very good that he can help out with running errands and stretch his wings and prepare for life as an adult. Very sad that he and his younger brother continue to slip out of my arms and into the world. Very scary that they are increasingly exposed to important and dangerous situations with insufficiently developed brains and decision-making skills. Some people handle this time of parenting with grace. It is taking everything I’ve got to maintain my balance, and it isn’t pretty. Sometimes as a parent, I still feel like the kid in the classroom, wondering what I missed. Caffeine only helps so much, and it is cold out here. I guess the trick is to remember I am not in this alone, and to keep looking forward while I balance the best I can, because this ride isn’t over yet. Thank you for hanging in there with me.